As many of you know, March 13th was...
SCIFIPAWTY!

@BorisKitty, being the considerate cat that he is, threw this pawty in honor of his Human2's birthday. Not only did he throw the pawty, but as an extra birthday present to Human2, the pawty raised over $1000 (the original goal was $500!) for their local shelter! Isn't that amazing?! BIG round of appaws for the generous anipals out there!

The #scifipawty was a lot of fun, with great music, great food, and quizzes and contests with LOTS of pawesome prizes. 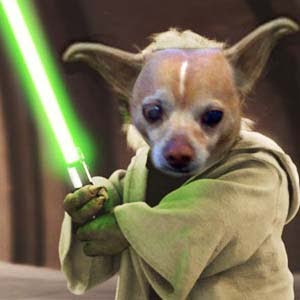 I got FIRST PLACE in the Costume Contest! I was so excited, I just couldn't believe it! There were just sooooo many fantabulatastic costumes to choose from, never in a squillion years did I think I would win FIRST! ...But I should have known better, with those awesome dogs up North, those @TRAILERPARKDOGS as my costume designers! I can't thank them enough for making me look so pawesome! Since they are the reason I won, Boris asked if I'd like to give them my prize...and they immediately told me they'd come smack me in the head if I did any such thing! BOL! So to avoid smacks, I just want to say THANK YOU to Coco and Goose for my costume and THANK YOU to BorisKitty for all his hard work putting on this pawty.

I do want to mention the Best In Show prize that was for the Costume Contest...my pal @ZackRabbit won it and I was so happy! He worked really hard on his pictures and did an amazingazingazing job to please give them a look!
Posted by blindmaximus at 5:01 PM