Okay, so a while back I posted about how excited I was to win the costume contest at @BorisKitty's #SciFiPawty thanks to the costume @TrailerParkDogs made me. Well, not only did I win the costume contest, I also won a quiz so I got these pawesome Urban Legends toys donated by @scifislacker, who got them with help from www.dogtoys.com and @BabyPatches' www.nipandbones.com ! 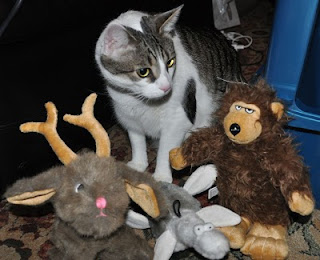 Note: even though he is an Urban Legend in his own right, Boris was NOT included with the three toys. I'm using this picture to show you the prizes because my own picture is almost as grainy as actual Loch Ness/Bigfoot footage! BOL! 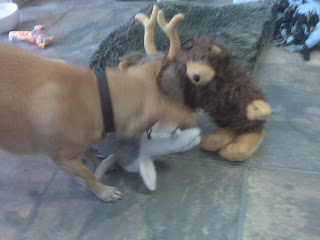 There I am, trying out that Loch Ness monster. About a second later, Ein stole the Bigfoot and the Girl stole the Jackalope! He is still sitting on her desk! I don't know why she wants a dog toy but she said something about Wyoming being the home of the Jackalope and she just couldn't bear for him to get all dirty and slobbery. What a dork.

Speaking of the Girl, my prize for winning the costume contest was a gift certificate and free Webkinz of my choice from @CaramellaCandy! So I got on www.caramellacandy.com to pick out my candy (hehehe) and my Webkinz. Boris suggested this BorisKitty Webkinz but then I saw the RACCOON! And I thought, "Oh, the Girl's birthday is coming up, that would be a most perfect thing to get her!" But I looked and it said "Out of Stock." I was so sad. So I put all my candy in my shopping cart and per the instructions, typed a little note: "For my free Webkinz I would really like the raccoon, but it says he's out of stock so I will take the Grey & White Kitty."

My package did arrive and we opened it and what is the first thing we did see? (Well, I'm blind, so the Girl did the seeing, but you know what I mean.) IT WAS THE RACCOON! We were both so excited! So thank you, Caramella Candy! Thank you, Boris!

Please check out www.caramellacandy.com - they have some really neat stuff and great gifts for anyone!
Posted by blindmaximus at 6:31 PM