In Which My Big World Gets a Little Bigger

The other day I was talking with some anipals about all the cultural information I've learned from other anipals ("cultural information" usually revolves around food, but that's not really my point). We talked about the friends we've made all over the world, the amazing things we've learned, and about how when our people try to tell "outsiders" about tweeting animals and pawties they get the "Cuckoo!" look. USPS, FedEx, and UPS people all over are shaking their heads at this increase in packages they're delivering that are addressed to pets.

The other side of this is when disaster strikes across the world, there's usually an anipal in that place. This will sound selfish, but I'm a dog--my life is eating, sleeping, fetching, and potty. I didn't really care about other places. But as soon as I heard about the riots in Egypt, I immediately thought of @MisterSnoop and how grateful I was that he had moved & was out of harm's way. Looking at my tweets during that time, I saw a lot of other anipals felt the same way.

So naturally, when this latest awful quake hit Christchurch, New Zealand, anipals scrambled to check on the pals we know live there. What used to seem a distant, impersonal crisis became gutwrenching, terrifying, and very close and real as we waited for news of our friends. Our pals @whskr and @rumblepurr were far enough away from the devastation; however others like @PollyPuss11, @Baxter_Man, and @LilycatQueen were all too close for comfort. Twitter was frantic until they reported in safe. We're still waiting (at the time of this writing) to hear firstpaw from @Oslo_Pup (though I've been told that Baxter's been told he's safe) and awaiting word from @MrSootyMeowvins.

Anipals being anipals, we immediately started thinking of how to help. @Rumblepurr set up a ChipIn on his blog (I've posted the widget here too). At the time I'm posting this, the ChipIn has already exceeded the goal, which warms my heart to know there are so many eager to help. The great thing about this ChipIn is that Rumbles' capable paws will make sure the donation will get to the Christchurch SPCA (and not in his nip fund--or the nip fund of anyone else).

Donations are purely voluntary (I'm a chihuahua-not exactly made for threatening people). Prayers are also appreciated and don't cost a thing. :)

PS-I've passed on the information I've been told via Twitter regarding the safety of our NZ pals. I apologize for any possible errors; I'd appreciate any updates or corrections left in the comments.
Posted by blindmaximus at 8:46 PM 11 comments: 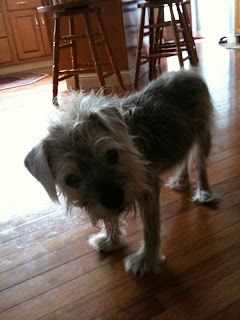 I did not know Vixen in "real life." She was not a tweeting anipal. But her people tweet, which is how my Girl knows them and how we came to know about Vixen...and then her suddenly, rapidly deteriorating health...

...and her last breath today.

Vixen was a 10-year-old border terrier and while most of us can say, "Ten years is a good life for a pet" I believe we'd all agree that ten years is in no way long enough. You readers understand the heartache of losing a beloved pet and I'm hoping most of you will comment here-I know her family will be reading this. My hope is they find some comfort in the sympathy and condolences of anipals.
Posted by blindmaximus at 7:01 AM 16 comments:

Seems I'm on a kick of mish-moshy blog posts. I guess this way there's something for everyone! BOL!


First off, I want to link to @TeenysFriends really cool blog. You see, Teeny's goal is to provide toys to needy shelter dogs. "Socialized" shelter dogs (playful nice ones who are playful and nice from getting to play with toys--that's where you come in, pay attention!) are more likely to find furever homes. So it stands to reason that getting toys to shelter dogs means more of those dogs will be adopted! Now, here's how you can help--AND KEEP READING PLEASE because this month, you can help give a toy to a needy pup WITHOUT SPENDING A PENNY! From Teeny's own paws:

So click those links and help shelter pups! If you're so inclined, you can also help by participating in their one-for-one toy program (for every toy you buy, they donate a toy to a shelter) or by joining their used toy mail-in campaign. Check out the blog or Facebook page for additional details!


Okay, next on the list: @BorisKitty. He has a couple things going on. First off, Boris is trying to get his fuzzy mug on a Bissell box by entering this contest. You do have to register to vote but it's super easy and you can vote once a day. I'm sure Boris would really appreciate you voting for him. Girl thinks because we own so many Bissell products we should get extra votes but I guess it doesn't work that way. But hey, while you're over there on Facebook "Liking" Teeny's fan page, go ahead and Like Boris's #SciFiPawty fan page too, okay? #SciFiPawty was a blast last year and I'm sure you'll want to know all about the goings-ons (I don't know what that actually means) for it this year too!

Weeks and weeks ago, @mattiedog sent me this pawesome Hank's Bacon Beer keychain! Girl put it on my collar, thinking it would be easier to get a picture of me with it that way. Yeah right! Fat chance! 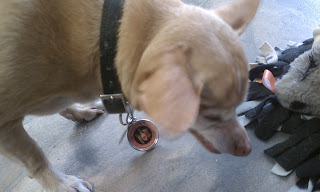 I'm not snarling--she just gave me a treat hoping that would make me more pose-conducive. Instead I just look vicious! 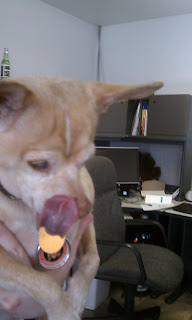 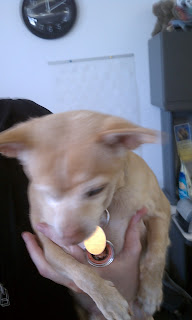 No, I can't see, but I have a special Spidey-sense that tells me exactly when to move to turn a great shot into a blurrrrr!


So now I think you're caught up on my Wednesday happenings. Thanks for stopping by!
Posted by blindmaximus at 1:15 PM 2 comments: