Zoooooom... Oh, that was too fast, I guess you can't see it in this picture. 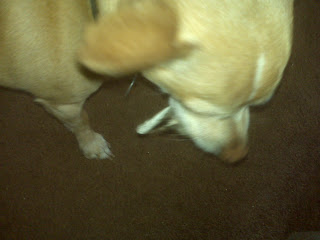 How about this? Zoooooooom! Nope, still too fast! I'm just a blur! Because I love this toy SO MUCH! 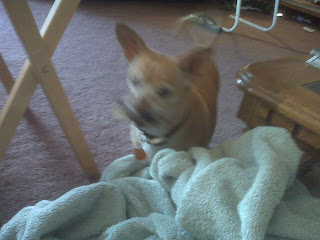 I should probably start (continue?) by saying that this toy isn't *actually* approved for dogs. On the package somewhere it might even say NOT for dogs AT ALL EVER. The Girl bought these Play-N-Squeak Mice for the new kittehs but Ein and I kept stealing them and would not listen to "NO." Neither of these mice still squeak or still have tails and Ein did not to get to play with them very much because he doesn't know how to play nice and Girl was afraid he'd crunch them. (The kittehs eventually got to play with them, hence the absence of tails.)

I can fetch this mouse for hours. Sometimes I forget where I put it and when I find it again, I'm so happy. When the Girl throws it for fetching (which is why it no longer squeaks-they really aren't made for fetching) ToPu, Kenshin, and I all go running to get it!

*whispers* I even take it to bed with me now.

So if any of you need a really super fantastical great present for a kitty or kittIES, I give paws up to the Play-N-Squeak Twice the Mice! But there are lots of great Play-N-Squeak toys to choose from at CatToys.com!

(I happen to have my blind eye on that raccoon. You know my fondness for raccoons! Hehehe.)

Oh, and I should probably add if you're a dog who actually plays with dog toys instead of cat toys, there are at least a squillion great toys over at DogToys.com.
Posted by blindmaximus at 9:08 AM