Saturday was kind of like Christmas; I got a new squirrel toy, Ein got a skunk toy, and even Wickie--who doesn't play--got a little bitty bear toy. But also in the boxes were kitty toys. Why?

Sigh. Because we have KITTIES. 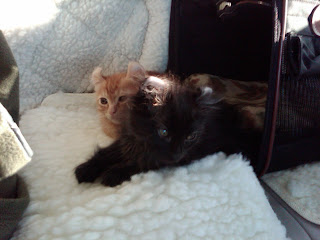 They had never seen a dog before coming to our house so it's been a little bit of an adventure. They must not be too ascared of us though, because they sleep in bed with ME (and they try to eat my dog food!). Sigh. 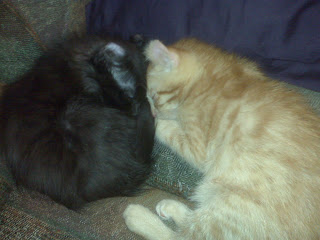 Okay, so that picture was on the couch, not the bed, but you get the point. And they don't sleep all the time, but if they're awake they don't stop zipping around long enough for the Girl to get a picture of them. So for now it's sleeping pictures on the crappy cell phone camera. 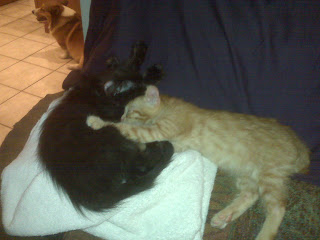 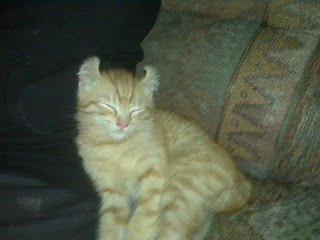 That little orange guy is named Kenshin...technically "Kenshin Himura the Battousai." You know how The Girl is with her long names for things. She said his orange hair and cheery personality match Kenshin's from the anime "Ruroni Kenshin." (Orange hair? Isn't Kenshin's hair kinda red in the anime? Whatever.)

The black one is named ToPu. That doesn't actually mean anything. The Girl's dad named him because when The Mom and The Dad went to pick out of the litter, the black one came out and *whispers* had poo on his toes! But they couldn't very well call him Puto because that is a bad word in Spanish. Soooo *rolls eyes* he became ToPu. (I think Kenshin got off pretty easy by comparison in the naming department!)

Oh, I should probably talk about their ears. They aren't freaks (well, they ARE, but that's just my personal opinion); their ears are supposed to be like that. They are called "American Curls." Kind of like the Scottish Fold only...not at all. Hehehe. As, uh, dramatic as their ears are, the Fambly wanted these cats for their famous personalities.
*mumbles* Which so far seems to be pesky, bossy, and hungry...

Posted by blindmaximus at 1:50 PM